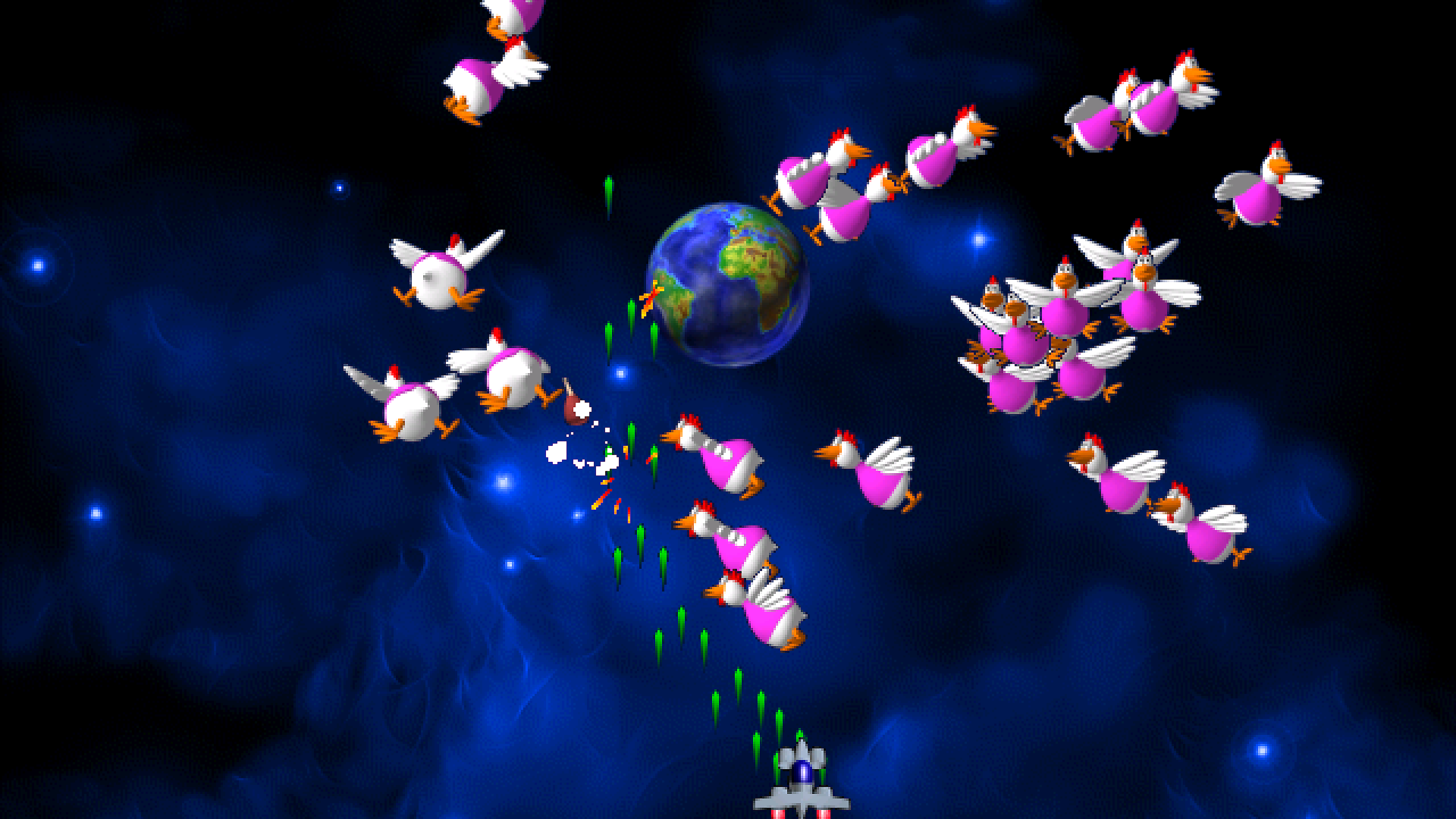 Eager to take over Earth, a horde of aggressive space chickens launch their invasion, set to the tune of Richard Strauss’ Thus Spoke Zarathustra. I, the hero and Earth’s last hope, hop in my spaceship and bravely face the clucking invaders. Wave after wave, I use my ship’s powerful lasers to turn the chickens into crispy drumsticks, dodge their egg projectiles, and grab upgrades to make my lasers even more powerful. Earth is ours, go fuck yourselves, you crazy chickens!

Chicken Invaders is a spin-off of the classic game Space Invaders from 1978. It was created by Greek developer Konstantinos Prouskas and released on July 24, 1999. Prouskas originally started working on a pixelated DOS version of Chicken Invaders back in 1997, but eventually switched to a higher-resolution version for Windows systems. The game had both a single-player and a two-player mode using the same keyboard on the same computer – perfectly for me: in the early 2000s, I spent a lot of time with my friends defending our planet and spaceships against aggressive birds. Even though the game’s premise is simple and it gets repetitive after a while, we enjoyed it with enthusiasm because we didn’t have access to as many games as we do now.

The gameplay of a Space Invaders-like is pretty easy: hordes of alien enemies come at us wave after wave, and it’s up to us to clear the screen of all of them with our spaceship’s weapons. We have to dodge both the enemies and their projectiles while they come closer and closer to our ship and avoid or shoot down flying asteroids between waves of attacks. Enemies become more numerous and faster with each wave and fire faster projectiles at us, and every few waves giant boss mobs with special abilities appear. In return, our score increases, allowing us to gain extra lives, and we can collect randomly dropped upgrades that equip our spaceship with more dispersed or significantly more powerful weapons. The further we get into the game, the more exciting and tricky the gameplay becomes, and the more nervous and sweaty we get. If we lose all our lives, the game is over. Simple, but genius. And in the case of Chicken Invaders, instead of spaceships and rockets, we deal with chickens, eggs, and crispy chicken legs.

Chicken Invaders was so popular at the time that Konstantinos Prouskas followed it up with Chicken Invaders 2 in 2002 and Chicken Invaders 3 in 2006, with better graphics, more varied enemies and scenery, more diverse upgrades, and other improvements like co-op mode. This was followed by Chicken Invaders 4 (2010) and 5 (2014), and Chicken Invaders Universe, which was launched in Early Access in 2018 and released in its final version on Steam on December 15, 2022, offering for the first time an MMO approach. Prouskas also released various seasonal spin-offs for each version of Chicken Invaders with Christmas, Easter, or Halloween themes, as well as ports to macOS, Linux, iOS, and Android. Over the years, a creative idea with a simple gameplay principle has developed into a vast franchise with many different game modes and scenarios, various level types and enemies, high-resolution graphics, and an orchestral soundtrack. And yet, the original 1999 core is still present in every Chicken Invaders.

All Chicken Invaders, from version 2 to version 5, as well as their spin-offs – a total of 12 titles as of today – can be purchased as a complete package via Steam and run smoothly on current systems, including Windows 11. The same goes for the classic first Chicken Invaders, which can be downloaded for free via the developer’s website. Let’s fry some chicken ass!