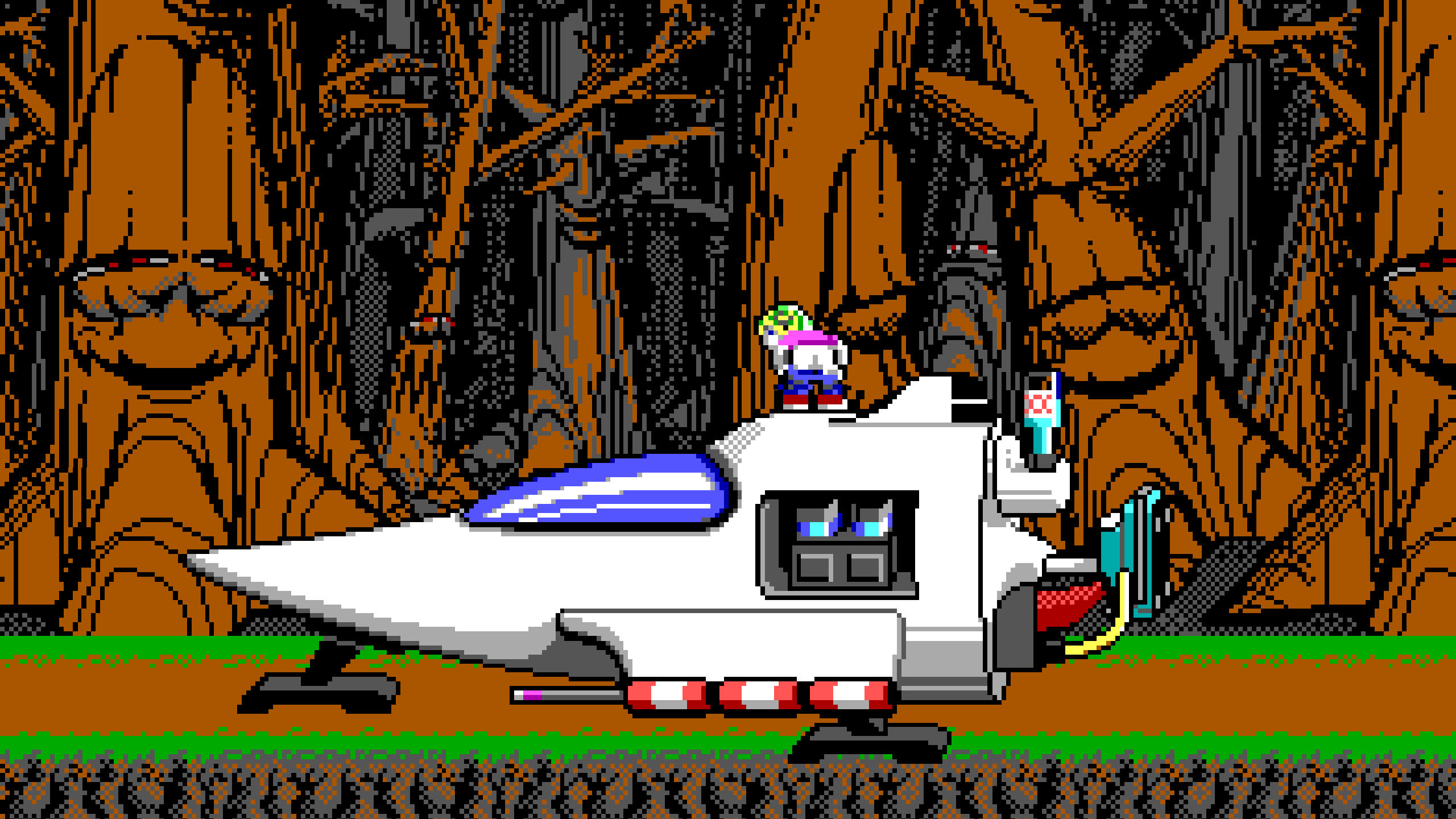 On December 15, 1991, Commander Keen 4: Secret of the Oracle was released. And this particular game skyrocketed my gamer career. Not in 1991 but roughly around 1994 when I was 6. Back in these days, I usually watched one of my older brothers playing games like SimCity 2000, Warcraft 1, The Settlers 1, DOOM, Duke Nukem 1 + 2, and Commander Keen. From time to time he allows me to take over the keyboard and play by myself. That’s how my gamer career began. Well, of course, I was considered too young by my parents to be allowed to sit alone in front of the PC and play “shooting games”. Accordingly, I learned to secretly sneak to the strategically located computer room (it was right next to my own room) and play whenever my parents were either out of the house – or during the nights. Understanding DOS and learning how to launch games was easy, and apart from the other games mentioned, it was the Commander Keen series that got my attention. I’ve played them all: Marooned on Mars, The Earth Explodes, Keen Must Die, Secret of the Oracle, The Armageddon Machine, and Aliens Ate My Babysitter. Uh, and Keen Dreams, but let’s quickly forget about this game (I don’t like it). But it was really the 4th part that caught my fancy, and I spent hundreds of hours in it – until today.

But what is Commander Keen about? Well, in Commander Keen, we take control over Billy Blaze, an 8-year old child genius who puts his older brother’s football helmet on his bob and flew with a self-made spaceship to Mars. The spaceship’s name is “Bean-with-Bacon Megarocket” and was made from common household objects and old soup cans, rubber cement, and plastic tubing, according to the game. And Billy built it because, um, he was bored, brainiac, and longing for adventures and exploration. Don’t ask about it, that’s how the early-90s games worked.

In Commander Keen 1, Billy arrived on Mars, when Martians aka “Vorticons” looted and pillaged his spaceship, after which he must find all the missing parts. In Part 2, he flies back to Earth and finds out that it is under siege by a Vorticon mothership. Which Billy single-handedly prevents – who needs Superman or all the other Marvel heroes? In part 3, he returns to Mars to confront the mastermind behind the invasion plans and to bring peace to Mars.

No sooner said than done. After the hero’s job is finished, Billy’s back on earth and proceeds with his daily routine. There, in his usual wunderkind manner, he builds a faster-than-light radio with which he can listen to conversations from all over the galaxy. He intercepted a transmission of the so-called “Shikadi” alien race, who want to destroy the entire galaxy with the help of an “Armageddon Machine” because they can. Of course, Billy can’t let that happen, so he sets out to ask the “Oracle™️” on planet Gnosticus IV for directions to the Shikadi’s home planet. However, those members were kidnapped by the Shikadi and held in different places all over their planet. So Billy sets out to Gnosticus IV to free the members of the Oracle and learn the “Secret of the Oracle”. No matter how many times he saved the world, it always manages to get back in jeopardy again.

As soon as we arrive, we jump and pogo our way through all kinds of levels and biomes. From dense forests to glassy cities and frosty lands to fiery islands and wet underwater worlds. We explore cave systems and villages, temples and ancient pyramids, discover secret passages with hidden treasures, and even a super-secret and super-difficult bonus level (greetings goes to you, yellow worms). We face rude enemies, are pursued by grim thunder clouds, have to find colored crystals to unlock locked gates of the same color, jump over dizzying chasms, and collect one or two hidden extra lives to start over from the beginning of the level when we die. And if it ever got too difficult or I wanted to replay a level of high score and fun, there were several fantastic cheats to adjust all sorts of parameters of the game (I remember that I’ve re-played the levels so often that the gaming score jumped from 999,999,999 to 000,000,000 points). Finally, at the end of some levels, we free the imprisoned members of the Oracle, who in their barbarity and absentmindedness remind us of Gandalf, and successively reunite them – to head towards the Armageddon Machine. But that’s another story. 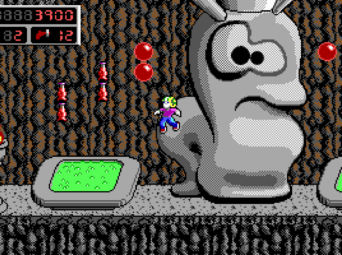 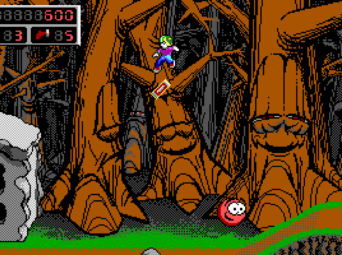 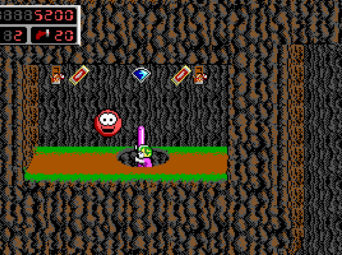 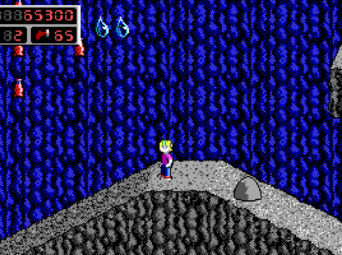 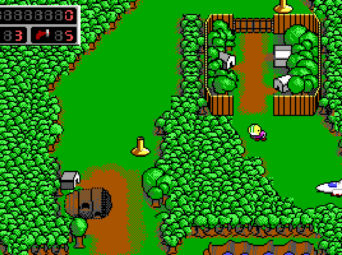 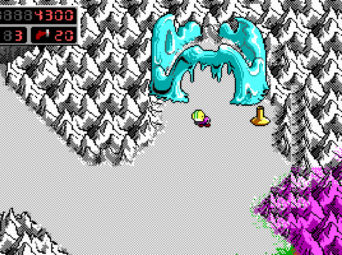 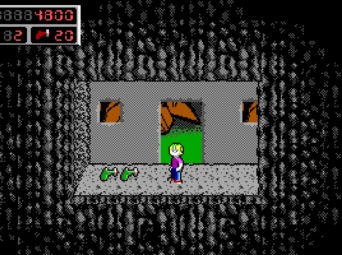 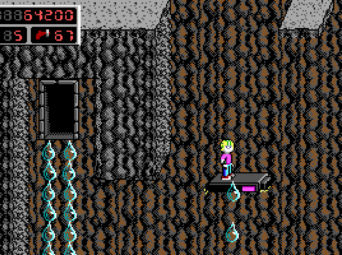 Billy’s not an ordinary sidescroller hero, but a well-read young boy. A real nerd. Accordingly, he uses neither fists nor lethal ammunition but knocks out his enemies with a stun gun. He’s also equipped with a fancy pogo stick that allows him to reach higher sections of the levels and squash nasty mosquitoes – the only opponents that have to die. But that’s OK because, well, they’re mosquitoes. His run, jump and hang animations are nicely drawn, and when he changes running direction, he keeps his stun gun in his right hand – what a nice detail. Speaking about details: when there’s no input from us players and therefore nothing to do, Billy breaks the fourth wall, looks at the player questioningly, shrugs his shoulders, sits down, and reads a book while occasionally looking into our direction. That’s what I call a wholesome idle animation.

Unlike Duke Nukem, who collects self-referring CDs, t-shirts, sunglasses, and soda, or other side-scrolling games where we collect orbs or coins, Billy is what he is: a young boy who loves sweets. Therefore, the levels are stuffed with chocolate, sweet lemonade, donuts, bubble gum, sugar drops, ice cream, and candy bars. It’s a joy to bounce through the squeaky-colorful levels on a sugar rush, dodging poison-pooping snails (I used to call them “Kackaschnecken,” which translates to “pooping snails”), hungry “sock-worms“, miming rocks and hot tar pits. All of this is accompanied by beeping, squealing, shuffling, and bubbling sounds, either coming from the PC speaker or, thanks to Sound Blaster, from real speakers. And then there’s the magnificent soundtrack, composed by Robert “Bobby” Prince, III. “Just midi music,” of course, but so much more. The music transports in some moments a friendly, colorful, and sugary theme, in others an oppressive and dangerous atmosphere. One song, in particular, has burned itself into my memory until today: “You’ve Got to Eat Your Vegetables!”. For me, this song represents Commander Keen 4 like no other.

It took me 25 years to figure out that it has some kind of lyrics, and that moment was mind-blowing. Check out this old interview with Bobby Prince about it.

And then there’s the Dopefish. According to the game, the Dopefish is “the second-dumbest creature in the universe. This creature’s thought patterns go swim, swim, hungry, swim, swim, hungry. They’ll eat anything alive and moving near them, though they prefer heroes”. This fish, which can be found in the game’s only underwater level in the game’s island area, taught me to fear back then. The Dopefish is a big, green fish that swims after us and, if it got close enough, would finish us off with just a bite and a wink to the face. It’s fat, green, terrifying, and yet no Shreck, and it’s mean. I was really afraid of this level back then. However, this greenish fish became so legendary due to its behavior and description that it has since appeared as an Easter egg in many other games like Max Payne, Return to Castle Wolfenstein, Quake 3, Alan Wake, Deus Ex: Human Revolution, and is still an integral part of memes and new id Software games. Even in DOOM Eternal, where I was happy to find the Dopefish just a few days ago again: 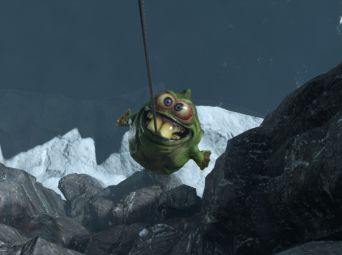 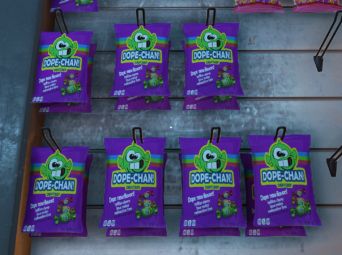 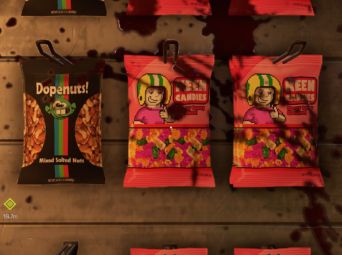 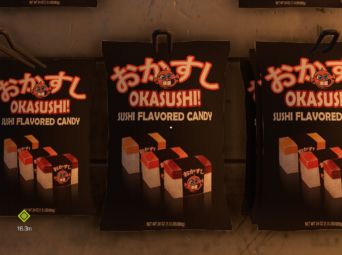 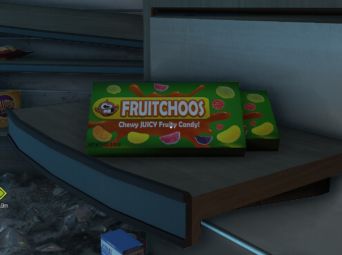 If you want to learn more about the Dopefish and its amazing background story, take a look at its official website on dopefish.com. Yes, even the Dopefish’s more famous than you and me.

There have been just a few games that fueled my gaming career as much as Commander Keen 4. Whether it was the freedom-promising pogo stick (I kept it on my Christmas wish lists for a few years), the tasty candies, or simply the amazing adventures we had in the role of the young boy called “Billy Blaze”. I was hooked on this game, and it changed my life forever. Just a few years later, I was already fighting, building, and rocking my way through classic mid-90-games like Tomb Raider 1 + 2, Descent 1 + 2, The Settlers 2, Age of Empires 1, and Thief, but the foundation of my gaming passion was laid by Commander Keen 4. That’s why I still visit Billy’s adventures in 2021 and follow him through his varied experiences in Commander Keen 1-6. And hopefully also in the future: once I’m old (I mean, even elder) and doddery, can’t hear so well anymore, have my third teeth, and increasing difficulty in jumping passages. When I’m an old man playing old games on old systems at LAN parties with old friends, indulging together in the most beautiful hobby in the world: gaming.

Thank you, Commander Keen 4, for enriching my life ?

Commander Keen 4: Secret of the Oracle at a glance